The Newseum -as their name implies- is a museum dedicated to news. It opened in April 2008 in Washington DC and quickly became very popular. A first version of the Newseum, smaller and less known, existed before in Arlington, Virginia.

The museum was created by the Freedom Forum with the support of several organizations also related to journalism and media, such as the Knight Foundation; and private companies such as The New York Times and News Corporation.

The building, designed by Polshek Partnership Architects, has an imposing glass facade which also displays a huge marble plaque with the text of the first amendment of the American Constitution. Ralph Appelbaum Associates did the exhibition design -and the firm has won several awards for this project. In seven levels, 250,000 square feet and 14 galleries the Newseum displays 100,000 words of text, 35,000 front pages and 6,214 artifacts. 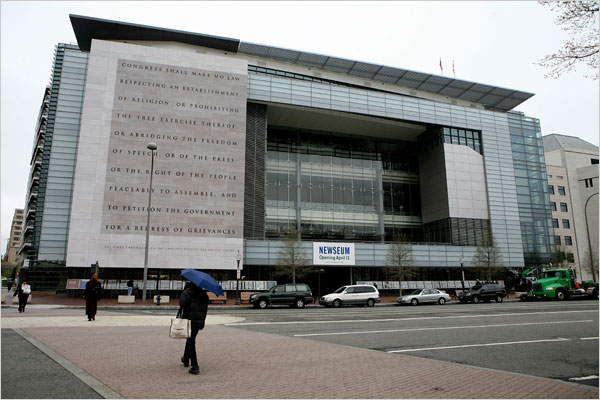 News exist as stories, as narratives. In strict sense, news are stories about events. But what are the physical dimensions of news? 35,000 front pages and 6,214 artifacts? The newseum provokes an interesting reflection on the materiality of news and journalism.

Maybe the most popular feature of the Newseum is the Today’s Front Pages Gallery, a display of over 80 front pages of the day of both American and international newspapers. A selection of the front pages is displayed in a gallery inside the museum, and others exhibited in the exterior lobby. This is, to me, the classical and yet ultimate representation of news materiality. What can embody better the idea of news than the print frontpage of a newspaper?

The online version of this gallery is also interesting. Over 800 newspapers worldwide send daily and electronically their front pages to the Newseum. Objects of the “analog world”, whose ultimate quality is precisely their physicality are exhibited digitally –immaterially, in a way. Daily front pages can be browsed by name and by region. The gallery also haves and archive of front pages of historic dates -from the tsunami in Japan to the royal wedding.

The Story of News gallery shows historic newspapers and magazine covers: from ancient front pages of XV century gazettes to XX century front pages with news that became milestones of American and world history. Eric C. Caren and Stephen A. Goldman, consultants for the museum, say the have been colecting rare and historic newspapers for over 30 years. 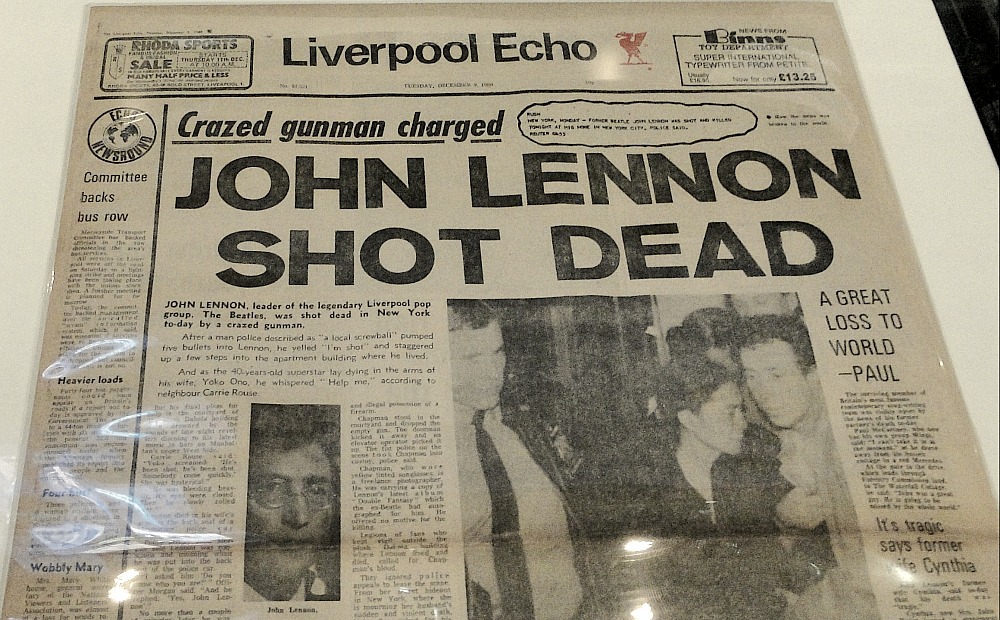 The Newseum displays many other material shapes of news besides newspapers. The ones that I find most interesting are the ones related to the news production craft; the journalists’ everyday tools -or at least the XX century journalists’ tools. Typewriters, recorders, cameras, and reporter notepads are part of the collection. 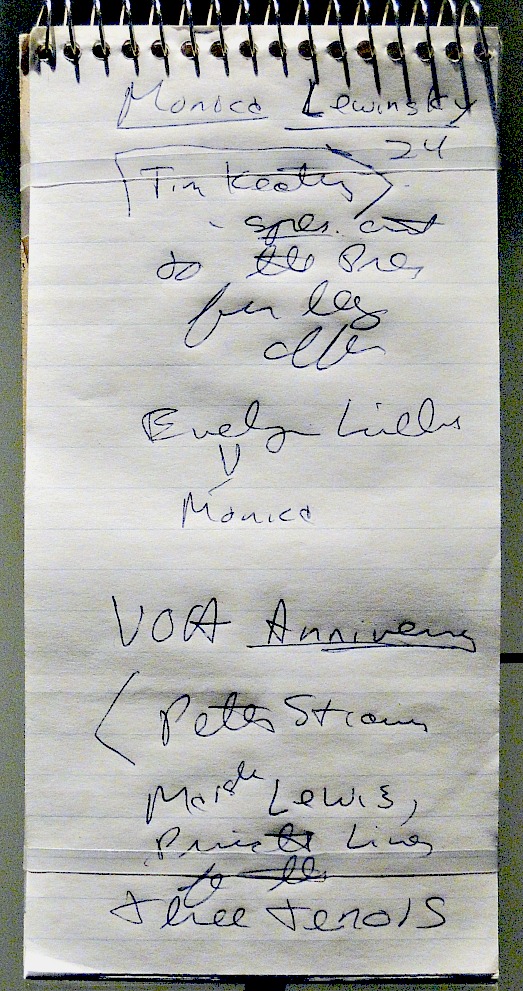 Notepad of the Newsweek reporter who broke
the Clinton Lewinsky story in 1998.

The XIX century journalistic trends are also materialized: among other curious items, the slippers of blogger Ana Marie Cox are also part of the Newseum’s colection.

But besides the working tools, there other kind of news objects: the material testimonies of news events themselves.

One of the galleries is dedicated to the Berlin Wall. The aim of this exhibition is to tell the story “of how news and information helped topple a closed and oppressive society”. The New York Times’ critic  Edward Rothstenin argues that that it took more than the flow of news to East Berlin from West Germany to bring down the wall. However, the exhibition is yet impressive materially speaking: eight complete concrete sections of the original Berlin Wall –
the largest display of the wall outside of Germany-, and a guard tower of Checkpoint Charlie are the central pieces of the gallery. 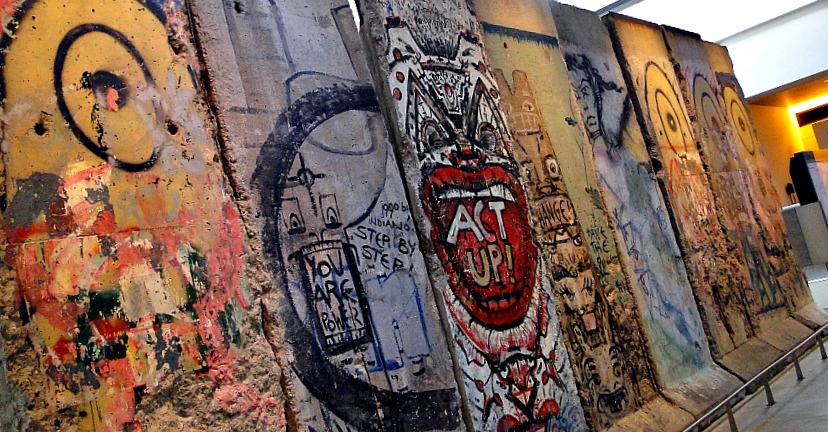 The 9/11 Gallery’s material testimony is also disturbing. The centerpiece is one of the broadcasting antennas from the World Trade Center’s towers. The gallery also displays front pages from September 12 2001 and short video pieces of journalists commenting on their experience covering the tragedy. Critic Edward Rothstenin annotates that the gallery is so shocking that a box of tissues is available for visitors -I missed this detail when I was there though. 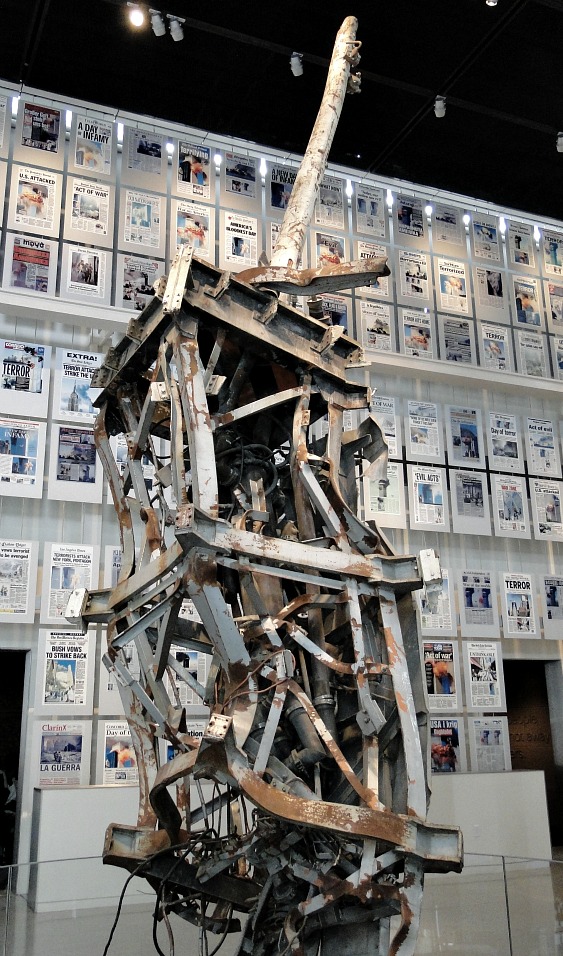 The wall and the antenna are the material testimony of events that became news, that became history. However, those objects without the story, the narration -the immaterial part of news- are out of context, and might represent something different.

The materialization of the immaterial

Some of the stuff related to news and news-making is even more abstract and immaterial. Good examples are the ideas (literally) of journalism ethics or press freedom. The Newseum dedicates a significant space to materialize these concepts -beginning by the enormous marble inscription of the First Amendment on the facade.

On the News and Press Freedom Around the Globe gallery, a huge map shows the state of press freedom around the world. The map and aditional information for each country are also avaliable online. 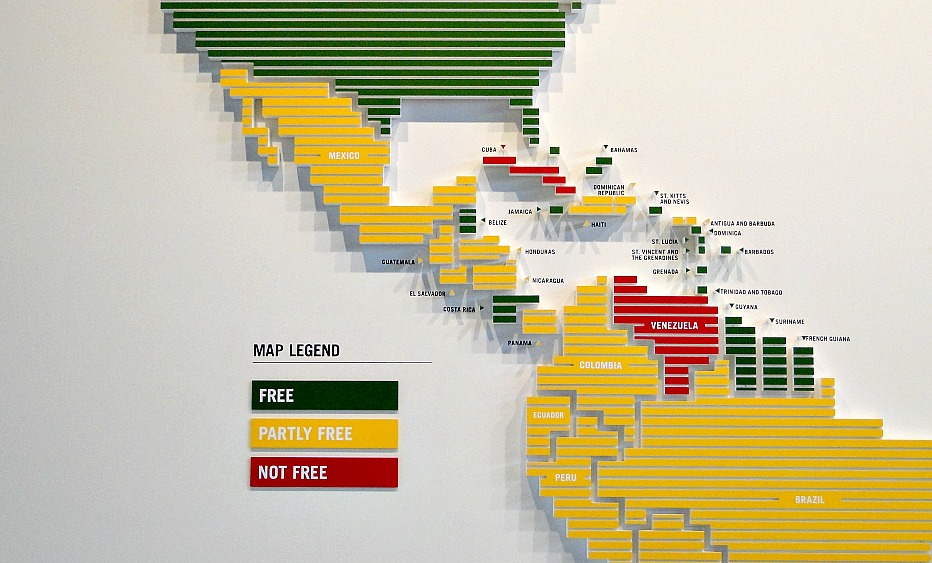 Another gallery, the Journalists Memorial, displays a set of panels with the names and photos of over 2000 journalists that have died covering the news. The list is updated every year. 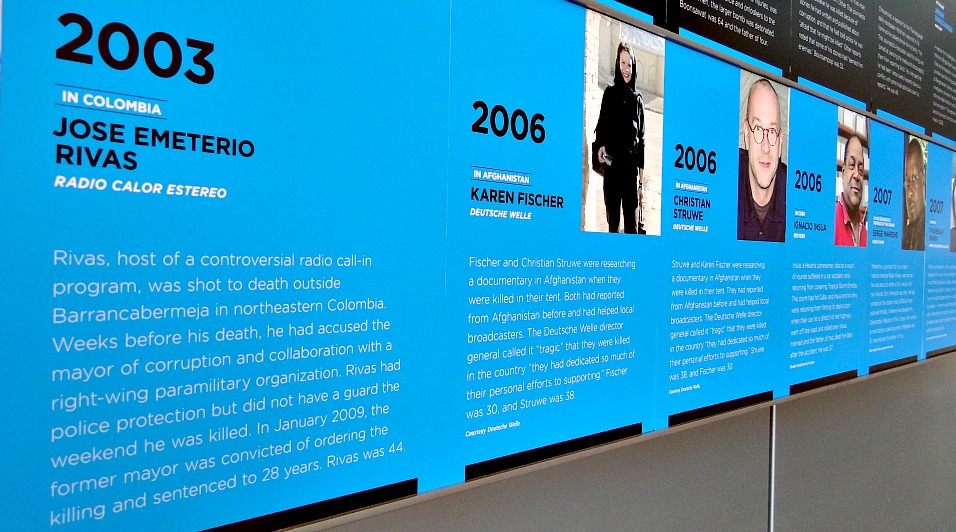 The online version of the memorial is a database that can be browsed by location, name, year and organization. The database contains records from 1837 to date.

Critic Edward Rothstein reviewed the Newseum right after its opening. He said:

Undeterred by fears of recession, accelerating layoffs in the print-news business and worries about the very future of newspapers (indeed, largely ignoring them) the Newseum has created a publicity-seeking monument to the news business.

What’s the point of praising newspapers without any critical reflection, when print media are precisely those who are on the edge? -one could wonder.

Well, maybe the Newseum came along in the right (last?) moment, to preserve some of the stuff that soon will become history.