JODI is an art collective between two net artists based in the Netherlands: Joan Heemskerk and Dirk Paesmans. Since the mid-1990s JODI have been a part of the net.art movement. They have explored, created and de-constructed: computer/video games, computer softwares, and the interfaces of web browsers with its commands, codes and errors. In her book The Glitch Moment(um), theorist and visualist Rosa Menkman mentions JODI as challenging “the ideological aspects of proprietary design by misrepresenting existing relationships between specific media functionalities and the aesthetic experiences normally associated with them.”[1]

Their 2008 web project entitled GEO GOO (geogoo.net) uses and bends the Google Maps and Google Earth interface. Using what is already in the interface of these two services, JODI hacked maps and the earth view to mathematically show us the earth (and the moon at certain times). Users of Google Maps will recognize the iconic symbols: the red line that gives direction, the place marker along with other icons, and the different views of the map. 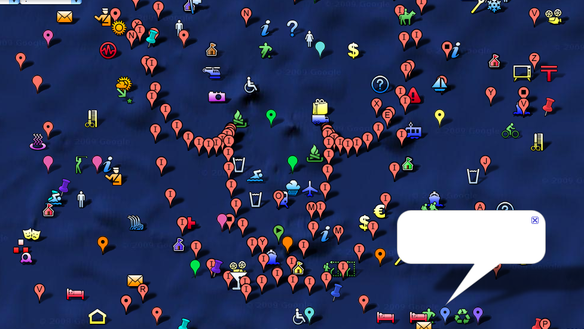 The website has three drop down menus for the user to explore with each option under the menu given a code titled. The first section entitled “geo” explores Google Maps through a map of the earth using a red line. Starting with the top option “x” a horizontal red line passes through the Equator. The next option “y” a vertical red line passes through the Prime Meridian. The following couple of options uses Cartesian coordinates to produce red lines. geo goes through the map in an archaic view. The world is presented flat and the options are programmed to display a red line being created.

The second section entitled “goo” explores Google Maps more randomly using the icons such as the place marker and transportation found in Google Maps. This section zooms in to the map to different locations on Earth and the Moon. The icons randomly create abstract geometric shapes and designs on the map for more or less in 30 seconds and then it transport the user to another location creating different shapes and designs. The one I love the most is r005-0001 where the place marker icon jumble together until there is no more space, in space. It is as if the place marker is counting all the stars and planets in the universe. The options under “goo” is mostly programmed to give a random icon and always creates the same design, but a few are programmed to be the same icon no matter how many times you choose that option (such as r005-0001 and mpi2r which only uses the place marker icon). 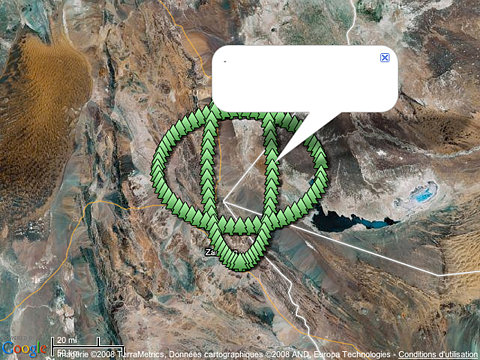 The last section is entitled “.” which uses both Google Earth and Google Street View in a macro scale. The first few options, the user has to install Google Earth in order to view the piece. The cities included with the “ge/” option all showcase a traffic circle/roundabout and connects to the next closest traffic circle. Similar to the goo section where the icons created a geometric shape, with the ge/ option, the map zooms from an earth view into a traffic circle in a particular city, zooms out to connect to another traffic circle within the same city and continues until all traffic circles have been accounted for.

GEO GOO goes from a macro scale to a micro scale through the different drop down menu. This work looks at the behavioral patterns of Google Maps and creates a new dimension of viewing maps and experiencing them. Imagine using JODI’s programmed directions for new psychogeographic experience, a new awareness to our surroundings.

Documentation of GEO GOO was included at iMAL, Center for Digital Cultures and Technologies in Brussels, Belgium. This 2008 exhibit entitled GEO GOO (Info Park) presented geogoo.net as a three channel installation with sound and a small scale model of Parc de Bruxelles. The three channel are each from the drop down menu from the website. There’s a youtube video that shows the space of the exhibit, and as well photos of the exhibit found on flickr. Although I doubt JODI created the small scale model of Parc de Bruxelles, in a recent event at Electronic Arts Intermix, Jodi mentioned not minding documentations of their work for exhibition purposes. I think the small scale model takes is not needed to document the web presence for an actual presence. Christiane Paul mentions in “Net art exists within a (virtual) public space, it does not necessarily need a museum to be presented to the public and seems to be particularly difficult to ‘connect’ to the public space of a gallery.”[2] The small scale model and the sound installation seems to be added to give the virtual space a physical museum friendly space.

Karen Archey’s recent article in Rhizome on JODI’s current exhibition “Street Digital”  at the Museum of Moving Image called the video documentation of the website “aestheticized, for example, expounds not on how we use or interact with such technology, but merely creates a pretty picture with its characteristic qualities.”[3] I found this statement problematic for several reasons. The obvious first reason is that this is a documentation, users are encouraged to play with different scenarios in geogoo.net and playing is a type of interaction. I do agree that GEO GOO does showcase pretty images, but there’s more to the surface.  This deconstruction of the interface show users the possibilities of viewing maps differently and perhaps viewing their surroundings differently. Aestheticizing an interface can help users understand that there’s more behind what we see on the computer screen. Users are encouraged to actively reflect upon the interfaces they use, how it can be transformed and later how they can transform it.