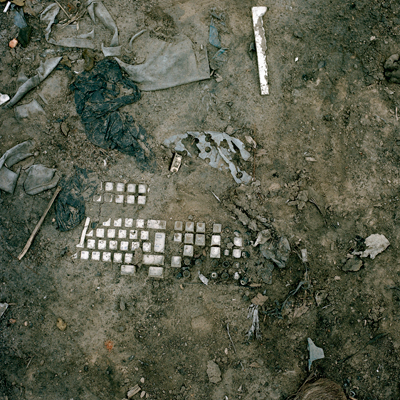 I saw this exhibit in Chelsea last Fall. Pieter Hugo visited a dump outside of Accra, Ghana, where a lot of the e-waste from the West ends up. I would have used it for my exhibition review but I already reviewed it in the Fall for another class. Here’s the link to the site to view the images (select Permanent Error):

For the past year Hugo has been photographing the people and landscape of an expansive dump of obsolete technology in Ghana. The area, on the outskirts of a slum known as Agbogbloshie, is referred to by local inhabitants as Sodom and Gomorrah, a vivid acknowledgment of the profound inhumanity of the place. When Hugo asked the inhabitants what they called the pit where the burning takes place, they repeatedly responded: ‘For this place, we have no name’.

Their response is a reminder of the alien circumstances that are imposed on marginal communities of the world by the West’s obsession with consumption and obsolesce. This wasteland, where people and cattle live on mountains of motherboards, monitors and discarded hard drives, is far removed from the benefits accorded by the unrelenting advances of technology.

The UN Environment Program has stated that Western countries produce around 50 million tons of digital waste every year. In Europe, only 25 percent of this type of waste is collected and effectively recycled. Much of the rest is piled in containers and shipped to developing countries, supposedly to reduce the digital divide, to create jobs and help people. In reality, the inhabitants of dumps like Agbogbloshie survive largely by burning the electronic devices to extract copper and other metals out of the plastic used in their manufacture. The electronic waste contaminates rivers and lagoons with consequences that are easily imaginable. In 2008 Green Peace took samples of the burnt soil in Agbogbloshie and found high concentrations of lead, mercury, thallium, hydrogen cyanide and PVC.

Notions of time and progress are collapsed in these photographs. There are elements in the images that fast-forward us to an apocalyptic end of the world as we know it, yet the alchemy on this site and the strolling cows recall a pastoral existence that rewinds our minds to a medieval setting. The cycles of history and the lifespan of our technology are both clearly apparent in this cemetery of artifacts from the industrialised world. We are also reminded of the fragility of the information and stories that were stored in the computers which are now just black smoke and melted plastic.