Revolution: The First 2000 Years of Computing (tagline: the story of how computers came to be) is an ambitious and expansive exhibition that looks at major milestones in the history of computing.

Launched in January 2011, Revolution is the permanent exhibition at the Computer History Museum in Silicon Valley. The museum calls itself “the world’s leading institution exploring the history of computing and its ongoing impact on society,” and houses the largest international collection of computing artifacts in the world.

Physical Exhibition
The 25,000-square-foot exhibition space is divided both thematically (by type of computing innovation) and chronologically (based on the date of significant innovations). There are over 1,000 objects on display. Each of the 19 galleries is a themed mini-exhibition that covers a particular subject. In addition to objects from the museum’s collection, related ephemera and multi-media stations allow visitors to watch vintage footage, hear stories, and explore hands-on exhibits. According to the web site, the exhibition “has something for everyone, from technical experts and geeks to curious non-techies who wonder how sophisticated computing technology ended up in, among other places, their microwave ovens.”

Ten years in the making, Revolution was curated by museum staff in collaboration with a team of industry advisors. The exhibition was associated with a major two-year, $19 million renovation of the museum building, which was funded by a large community of private donors including Bill Gates.  The museum and the exhibition were also supported by corporate partners such as Google, Microsoft, Frys.com, Intuit, and Intel.

Online Exhibition
Revolution Online launched in March 2011, shortly after the physical exhibition opening. According to the web site, every aspect of Revolution in its on-site form was executed digitally as well. The online exhibit is in fact far more extensive than its on-site counterpart; while only 2% of the collection is on view in the museum proper, 75% is available online.

The site was designed by Second Story. Its design employs an intuitive interface that displays a rich range of information. The aesthetic is clean and modular. The homepage contains nothing more than a large slideshow display of the 19 exhibit areas, a few callout links, and a search bar.  The global navigation is minimal, as well — the user only has two options to choose from: Topics and Timeline. Images and multimedia are accompanied by articles or short captions that provide historical context.  Simple yet effective graphical cues indicate the breadth and depth of information available (ie. circles show how many objects are explored in each topic; horizontal bars show how many articles relate to each object).

Despite the simplicity of the design, Revolution Online is incredibly data- and media-rich, guiding the user through a virtual tour of landmark events in computing history via clearly organized thematics, interactive timelines, and extensive imagery and video resources.  In many ways, the virtual exhibit improves on the experience of the on-site exhibition — through the information is still presented in a fairly linear fashion, it employs a powerful search function, and allows the layering and linking of information through keywords.

Narrative Strategies
The site’s rhetorical, interactive, and visual strategies work together to describe an overarching grand narrative in which the hero is technology.  Progress is presented as the history of inventions, which in essence created the modern world. The introductory text on the landing page immediately sets up the framework through which the exhibition is presented:

“The story of computing is epic. It’s driven by the human passion for tinkering, inventing and solving difficult problems where accidents and luck can be as important as brilliant engineering. Explore the revolution that has changed our world…”

This narrative of progress is reinforced by the designed elements of the site, as well: the linear chronology of the timeline, for instance, or the way in which each object is carefully numbered, documented and presented in a fashion reminiscent of an archaeological catalogue. 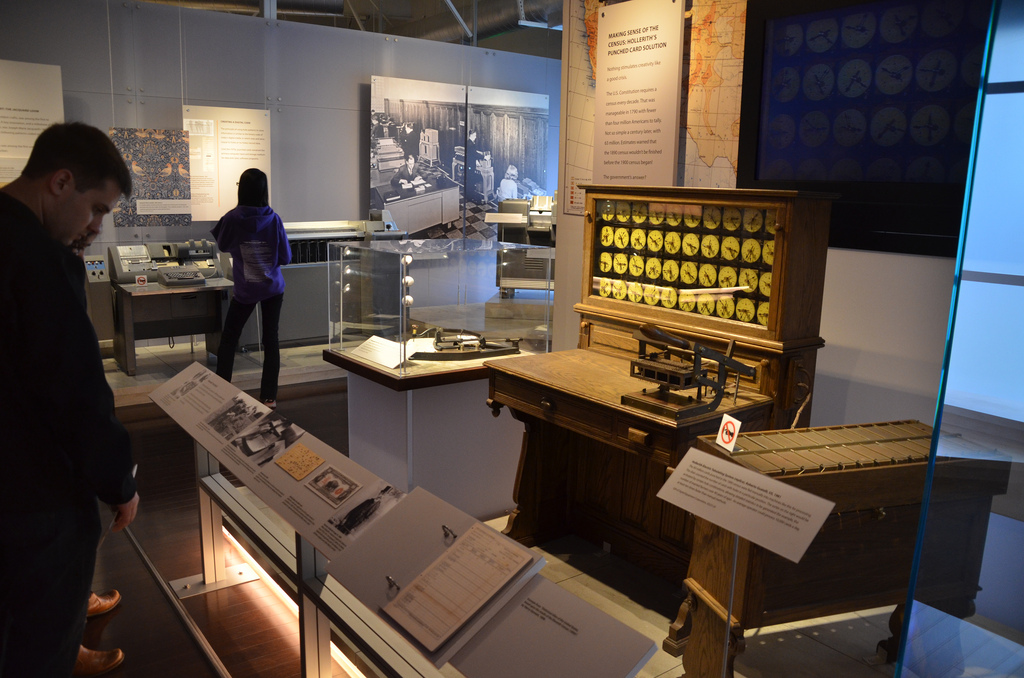 The narrative is emblematic of a kind of progressive optimism that, as Schlerath argues, has pervaded recent scholarship in the field of material culture research. According to Schlerath, one danger is its depiction of the past as “one material success after another in an ever-upward ascent of increased goods and services for all the nation’s citizens.” He also notes that this tendency is particularly evident in technical museums: the “exhibition of artifacts in museums often promotes a view of history as a story of success and achievement. Such exhibitions usually neglect the downside of human life, common to all of us but not commonly depicted” (Schlerath 16-17).

Revolution certainly doesn’t take a critical look at the computing industry. For instance, there is no mention of how technological “progress” and planned obsolescence have resulted in a global, fast- growing excess of electronic waste. Neither is there a critical exploration of the labor conditions of that make these increasingly-rapid cyles of production and consumption possible. On the contrary, the exhibition proudly and transparently seeks to elevate the visibility of certain industry heavyweights — Intel, Apple, IBM, etc —  either by contributing to the mythology of their creation stories (see Google’s callout on the homepage), or  by extolling their contributions to the history of computing as a whole.

Applications and Critiques
There are several practical lessons that we can learn from Revolution Online as curate our own exhibitions.

Overall, the exhibition is a great resource for those looking for a broad overview of computing history inflected by the study of media archaeology.  It offers an accessible, well-designed, multi-layered approach to storytelling that suits a variety of learning styles. It enables multiple points of entry to the same information (ie. topics, keywords, timelines, and search). It effectively employs multiple media formats, including images, documents, and video.

For me, what’s missing is an analysis that places the history of computing within a more complex and critical theoretical framework.  A material cultural studies analysis would help reconsider the first google server as a symbolically charged artifact, or expose the mythification of Apple and its products, for example. A Marxist analysis could help explain how the global political economy influences processes of technological consumption, or explore how technology can be used to question or subvert a grand narrative of progress. An analysis following Latour would reconsider the material and non-material world of technology as a network inhabited by human and non-human agents.

Re-envisioning the material from a more complex media studies perspective would investigate the exhibition and the web site as two heavily mediated environments that betray their own ideological underpinnings, and more fully explore how computing artifacts have been used in various ways and for various purposes throughout history.