Deep in the catacombs of “abandonware,” old computer programs that run on obsolete systems and/or have unclear copyright ownership, you will come across a genre of computer gaming known as interactive fiction, or text adventures. These “games” are not very much unlike hypertext fiction like Shelley Jackson’s Patchwork Girl.

They are known as games, but they hardly have any competitive nature to them. They require intellect and… patience to allow the entire story to unfold. The result is the “reader” must interact with the world of fiction instead of traditionally following a narrative.  One of the first successes in this genre was Infocom’s text-based adventure, Zork.  Pictured below, you can see my attempt to “slice troll”: 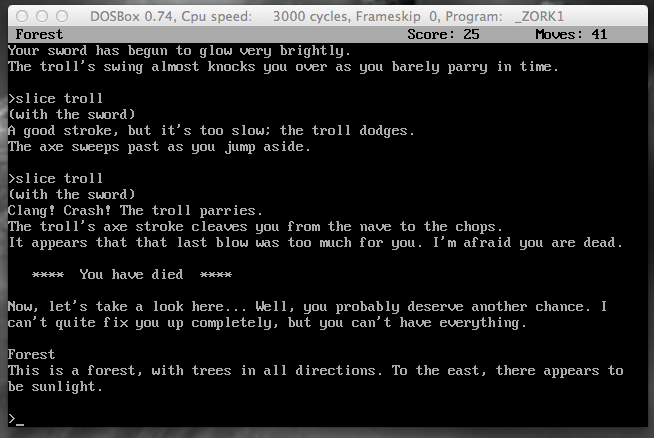 The genre has evolved into graphic-based adventures and then into the games that are available today that cover many genres.  Even in games with HD graphics and big explosions immerse the player in a world and narrative that they feel they must uncover. Most (if not all) of the narratives are linear giving the player the illusion of furthering the plot, which means they involve themselves more than a book or film.

I just wanted to post a little bit about this; it was a game genre that always turned me off as a kid, but I’m interested in them now for some reason.  If you’d like to check these games out yourself, you can search an “abandonware” site like myabandonware (or you can get all of the original Zork games here.  You might need a DOS emulator like DOSBox (you can easily figure out how to use it!)  AND, there are folks (it could be you!) who are still making these games, check it out.  I will leave you with this awkward Youtube video of somebody playing the first Zork: